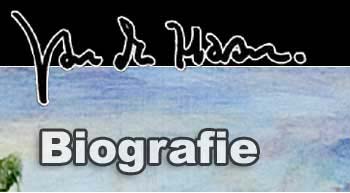 scroll down for an English version of this page.

Etcher Jan de Haan was born and raised in Edam. He now lives and works in the nearby city of Purmerend, yet the etching entitled Edam is one of the works, which he describes as representative for his oeuvre. Especially that etching greatly shaped my approach and constitutes the starting point and inspiration for many new works. Next, Edam belongs in the category of etchings in which the application of craftsmanship and artistic composition successfully coincide. It is feasible to view that etching at a glance, but equally one can study its properties for many hours.

Jan de Haan is a headstrong etcher and painter. Characteristic is his statement “dreaming, meditation, but foremost observing is my profession. Somehow I feel compulsive to mould each new day.” During his study at the Gerrit Rietveld Academy , Amsterdam , Ap Sok and Lex Metz taught him the basic skills of etching techniques. Herman Gordijn was his lecturer to develop his painting skills. Yet, his principal ‘tutor’ is Hercules Seghers.

Like Seghers (ca 1590 – ca 1638), Jan de Haan is a creative artist and an architect of imaginary landscapes. By applying his own specifically developed etching technique, inasmuch he uses asphalt powder, he constructs his compositions by means of countless delicate lines. Firstly, the skeleton of the drawing is sketched on the zinc plate. Thereafter, the minuscule asphalt grains are scattered on the plate and structured by means of brushes of different size and make. While the grains are slowly and precisely amalgamated, the line of the drawing ascends and descends. Eventually, once the intended black-white effect is achieved in the composition, the process of amalgamation halts. At that time, the plate is heated and the composition in powder is burned onto the plate.

While the working process is progressing, Jan de Haan balances continuously between abstraction and reality. In an ongoing interaction with his utensils and materials, he sets out the course but equally these do direct him as well. In an ongoing effort, he draws a multitude of imaginary intertwined twigs, until an illusory landscape comes into existence. Occasionally the presence of human being is suggested in the imaginary landscapes; however, the spectator must unravel the panorama and preferably experiences such by using a magnifying glass. During a considerable length of time, the Hades (the gloomy abode of the dead) functioned as theme in his work and intense fire was raging in the printings. Recent works reflect a more restraint nature. Each drawing is a complex one and comes into existence after numerous etching phases. Ten to twenty intermediate stages are common practice. The ultimate state resembles similarities in design and detail with delicate lacing. The number of printings of each plate are limited. Usually three prints are made of each plate: two copies on linen, one on paper.

Jan de Haan experiences the creation of oil paintings, specifically those of portraits and landscapes, as preparatory studies for his etchings.

“Compared with painting, etching is a more profound working process. Whenever I am engaged in the etching process, I encounter myself on the zinc plate. In a way, I am painting. The cumulative experience with the composition of oil paintings is beneficial; occasionally that enables me to skip a few phases in the etching process.” Jan de Haan uses a palette of yellows, reds and blues for his portraits that he composes of translucent layers of paint. In the same way as his etchings, each painting evolves gradually – image over image – towards its final stage.

Revised versions of his etchings originate annually. Jan de Haan asserts: “The existing oeuvre provides me with ample opportunity to continue for a lifetime. I devise a new experience within some of the earlier composed landscapes. I rework such an etching that is printed on linen or on Belgian cotton, with oil paint by using brushes of weasel hair. In fact, I create a painting within an etching. Overall, the composition remains identical but details are altered. Not each etching is suitable for such reworking. I would never make any revisions in ’Wave of Fear’ or ‘Hades’ as these reflect a characteristic portrayal of a becalmed era. I make an effort to turn out two large size etchings annually. My most recent work ‘Drown madness in August’ is the first etching composed of four individual parts”

Made with ❤ by WordPress & WPQS